If you are considering a renewable source of electric generation, please contact Member Services at 800-432-9720.

Net-metering is the process of measuring the difference between the electricity supplied by Carroll Electric and the electricity generated by a net-metering facility that is fed back to the Cooperative over an applicable billing period.

A net metering facility is a system installed for the production of electrical energy that:

Yes, there are size limitations for net-metering facilities. Net-metering is intended to primarily offset part or all of a customer's requirements for electricity.

For residential customers, a net-metering facility cannot have a generating capacity that exceeds:

Unless otherwise approved by the Public Service Commission, a net-metering facility for non-residential customers cannot exceed one thousand kilowatts (1,000 kW).

Please see the question “Can my net-metering facility offset electricity usage at my other Carroll Electric accounts?” for additional information on this subject.

The vast majority of net-metering facilities installed in Carroll Electric's service area are roof-top solar facilities. With that in mind, we have created a brief, yet informative document that may offer help in the decision-making process.

Maybe. The answer to his question is determined by several factors, and there is no clear-cut answer that accommodates every potential net-metering facility.

Carroll Electric will assess all potential net-metering facilities on a case-by-case basis in order to determine if the Cooperative's facilities must be modified to accommodate the proposed installation.

Yes. Some solar advertisements falsely claim that you can “eliminate” your electric bill if you install solar or some other renewable energy source.

While you can possibly reduce your overall electric bill with net-metering, there are some charges on your bill which simply cannot be avoided. One such charge is the service availability charge. Service availability charges were designed to recover a portion of the fixed costs the Cooperative incurs to provide electric service to its members. These costs occur regardless of how much electricity is supplied each month by the Cooperative.

PVWatts is a free online resource that can be used to review your solar system's expected production schedule.

Solar panels produce less electricity as they age. This process is called degradation. Manufacturer's typically guarantee 90% of the solar panels' production for the first ten (10) years. After ten years, that percentage drops to 80% for the remaining useful life of the solar panels.

The tilt of your solar panels can have a major impact on the overall output of your system. Ideally, you would want to adjust the tilt of your panels throughout the year because the sun is higher in the summer and lower in the winter. However, systems that track the sun are more expensive and require more maintenance because they have moving parts. Every fixed tilt system, such as roof-top solar installations, has an optimal angle that will make the most out of each season, and, while a few degrees may not make a drastic difference in a single year the difference over the lifetime of the system could be much more substantial.

Solar panels will generate the most energy if you optimize the orientation of your panels. In the United States, you will achieve optimal annual energy output, if your solar panels are facing due south. 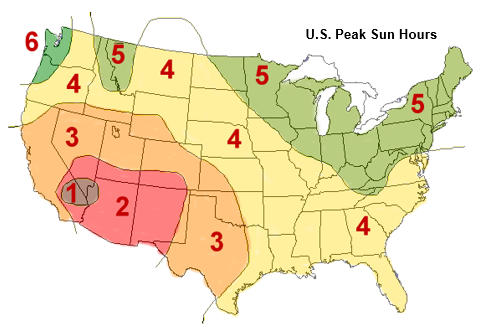 Another item to consider that relates to the location of solar installations is shading. Solar panels are composed of individual solar cells, and if those cells are covered by shade, then they will not generate at full capacity. If a portion of your solar panels are shaded, the other panels will still operate, but it will decrease the amount of electricity that the system produces overall.

Solar panels work by absorbing the light from the sun - not the heat from the sun - and turning it into usable electricity. If the outside temperatures are too hot, it can actually hinder the performance of the solar cells and reduce the output of a photovoltaic (PV) solar panel system. In fact, the output of a solar panel is inversely proportional to the temperature of the panel. In other words, as temperature increases, panel performance generally decreases. The Temperature Coefficient of Power quantifies this relationship between heat and power output. It's expressed as a % Power / °C. The smaller the temperature coefficient of power, the better the panel will perform at higher temperatures. If you happen to live somewhere hot, a low-temperature coefficient will be important in maximizing your system's efficiency.

When we think about things that block the sun, we often think of trees and cloud cover but, on a smaller scale, you also have to worry about the dirt and debris that accumulates on solar panels and all other surfaces over time. This is referred to as soiling. If left unattended, standing dirt and debris can also limit a solar panel's production. 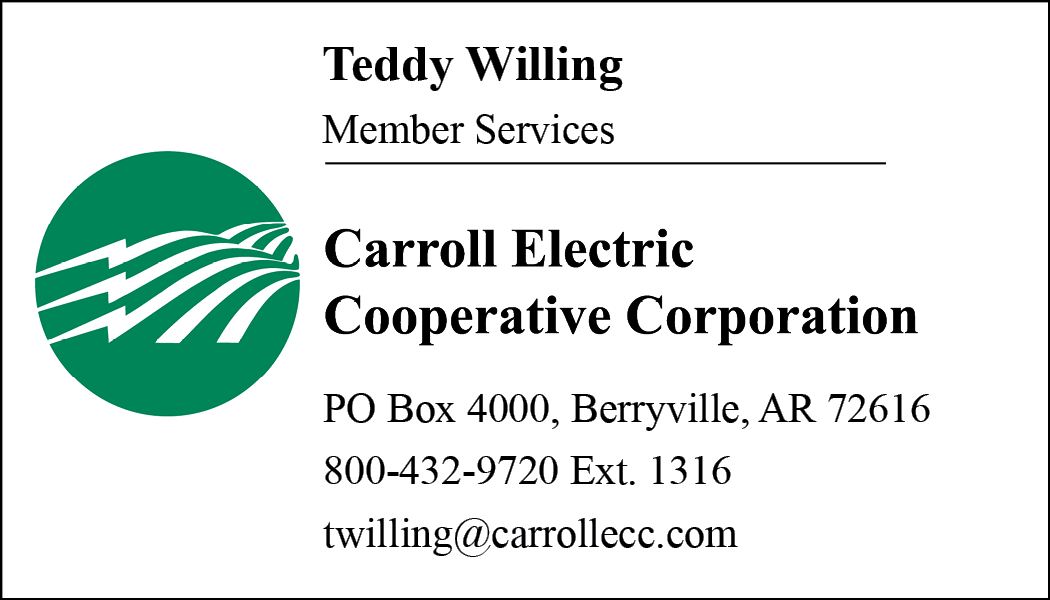 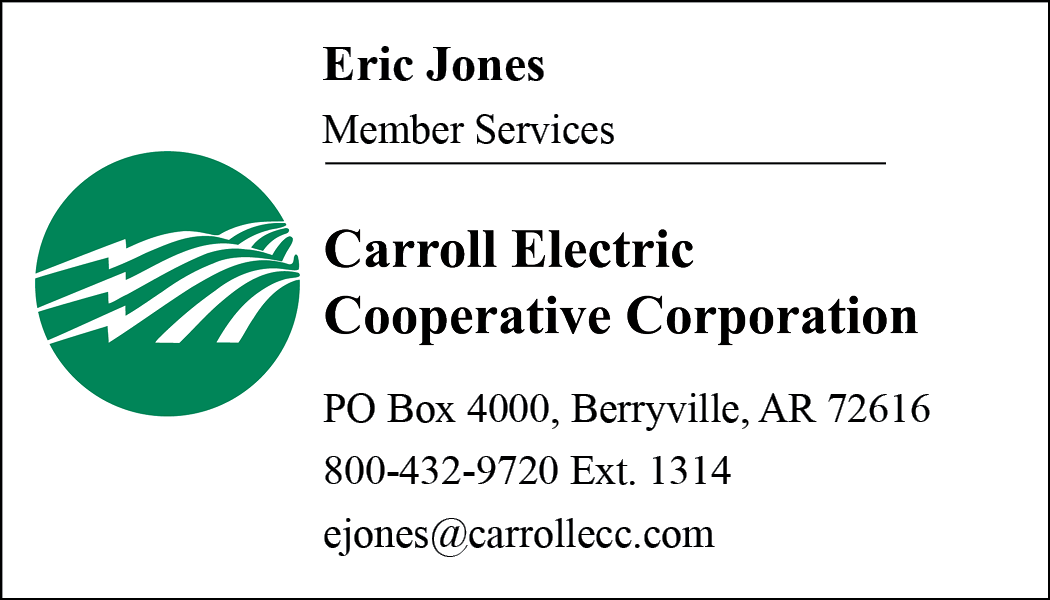 For Carroll Electric's graphic on how to read your net-metering electric bill click here.

Yes, but there are conditions. The current net-metering rules allow for meter aggregation if: 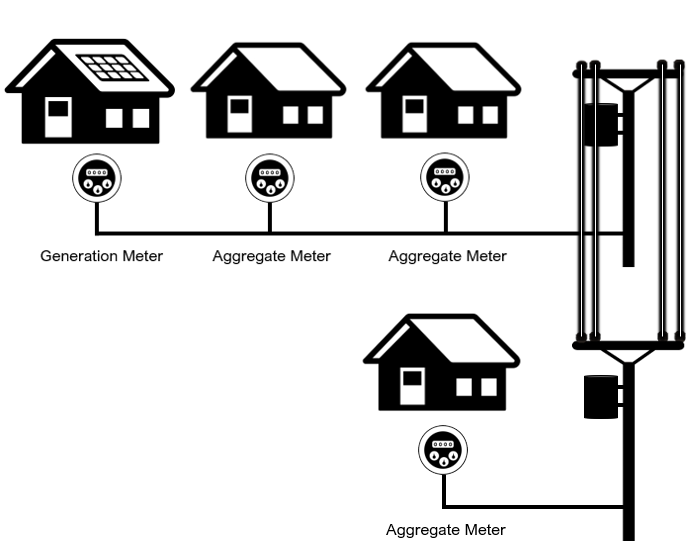 A generation meter refers to a net-metering customer's meter to which the net-metering facility is physically attached.

Throughout the day, your home or business is actually using the electricity generated by your net-metering facility.

Reverse production occurs when your net-metering facility is producing more electricity than your home or business requires.

All things being equal, the reverse production kilowatt-hours listed on your electric bill should be less than the total kilowatt-hours your net-metering facility generates for the applicable billing period. 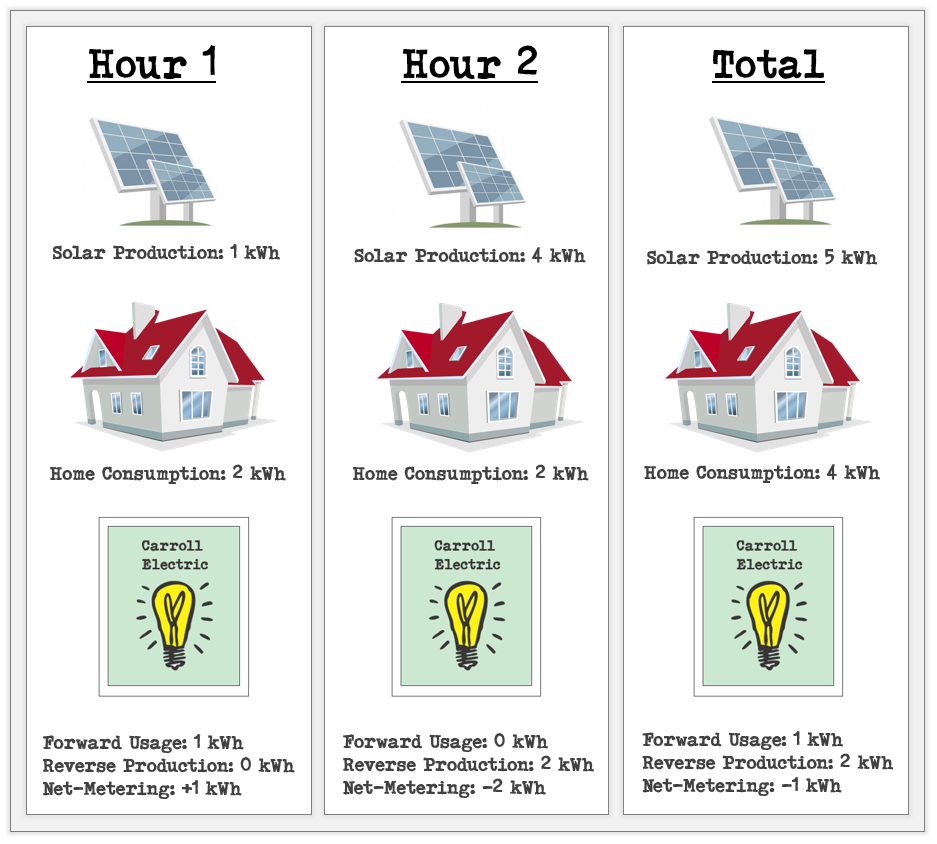